Launch party for 'The Devil's Pipeline' was a success

POINT RICHMOND - Saturday's launch party to celebrate the publishing of The Devil's Pipeline was a success all around.
About 60 people attended, filling Kaleidoscope Coffee nicely.
The author managed to mangle only a few sentences in his speech.

And the audience asked some great questions, the answers to which will be incorporated into the next launch party, Feb. 11, 2019 at 6 p.m. at Book Passage in San Francisco at the Ferry Terminal.
Along with an amazing turnout of local friends and supporters was the former president of California State University, Sacramento Donald Gerth and his wife Bev. Two former students of the author came also - Jennifer Noble and Jennifer Maldonado.
Both women were student editors with the campus-based State Hornet newspaper while the author was faculty adviser to the publication and a professor in the Journalism Department at Sacramento State.
In the author's presentation some details about the next novel in Jack Stafford series (tentatively titled The Wolverine Rebellion) trickled out.
• The next book will continue the tradition of The Fracking War, Fracking Justice and The Devil's Pipeline by having a strong environmental emphasis.
• The ongoing assault on civil liberties in the U.S. (and potential ones) will be a major part of the plotline.
• The first section in the book is tentatively titled "Assembly," a nod to freedom of assembly, one of the pivotal elements in the 1st Amendment to the U.S. Constitution.

Posted by Michael J. Fitzgerald at 1:44 PM No comments:

POINT RICHMOND, Calif. - The electronic version of The Devil's Pipeline was uploaded into the chronosynclastic infundibulum this morning.
If chronosynclastic infundibulum is wildly obscure, a re-reading of the late Kurt Vonnegut's 1959 novel The Sirens of Titan might clear it up. It's one of Vonnegut's best novels.
The shorthand definition is to say that the novel was uploaded to Amazon, Apple Books, Kobo, Nook and a dozen electronic reader formats through a company called Draft2Digital as well as Kindle Direct, the Amazon e-book publishing system.
Same book, same characters, just available now on your iPad, iPhone, iGuess, Kindle reader or, I suppose, your Apple watch.
Even though the book was sent to into the ether, it may take a day or two - because of the holidays - for it to show up in all the e-formats.
In the meantime, the book launch party is on for Kaleidoscope Coffee in Point Richmond for Saturday, Dec. 15 from 2 p.m. to 4 p.m. Everyone's invited...
Kaleidoscope has excellent coffee, tea, snacks - and wine. What kind of book launch would it be without wine? 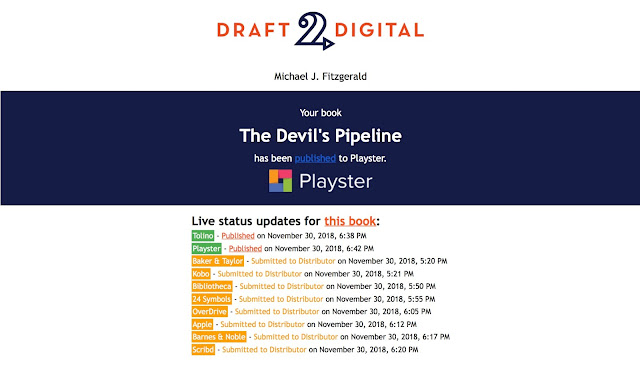 Posted by Michael J. Fitzgerald at 10:21 AM No comments:

'The Devil's Pipeline' published and ready to read 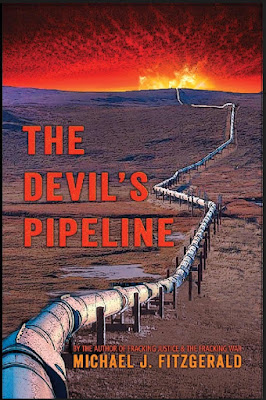 POINT RICHMOND, Calif. - The Devil's Pipeline made its print-version debut Saturday and is available via Amazon.com.
The E-Book (in Kindle, Apple Books and all those other electronic book formats) should be available in a few days.
The final sprint to publication came during several weeks of amazing feats of computer magic performed by Adm. Sylvia Fox. That magic was punctuated occasionally by muttered incantations directed at her computer screen.
But in the end, the final book product looks (and I hope reads) great. You can read a sample on the Amazon page.
The official "launch party" will be Saturday, Dec. 15 from 2-4 p.m. at Kaleidoscope Coffee in Point Richmond, Calif.
Everyone is invited to this celebration/soiree.
The publication of the novel ends more than two years of on-again, off-again writing, editing, beta reader reviews, proofreading and manuscript back and forth with two different commercial publishers.
In the end, Adm, Fox and I used an Amazon publishing platform (for the print version) and a separate electronic system for the E-book (the same one we used for the E-book of  Fracking Justice). I'm pleased with both.
Please come to the Kaleidoscope event if you possibly can. It's going to be a great party. You can ask me there when the audiobook is coming out...

Posted by Michael J. Fitzgerald at 11:43 AM No comments:

'The Devil's Pipeline' on track for fall publication

POINT RICHMOND, Calif. -  How many times have I written this headline before?
Don't go back and look. It would be too embarrassing. This novel has been a see-saw battle both internally for the author and externally.
But this time I can say with certainty publication is imminent. The book only needs a few pieces to fall into place before - Voila! - The Devil's Pipeline should become available in e-book and print.
Some of those pieces rest on my shoulders - the writing of acknowledgements, a preface and dedications, along with a number of other similar details.
Getting the book into actual production is being handled ably by Adm. Sylvia Fox, whose patience is far greater than mine.
One big piece remaining is the cover design. It was to be done by the same artist who did Fracking Justice.
But her schedule became overloaded just as I needed the cover to complete the project.
But in a week or so I hope to meet with a Northern California artist of considerable fame to see if she is willing to take it on.
Thanks for your patience. There's a Pipeline headed your way.
Posted by Michael J. Fitzgerald at 3:09 PM No comments: 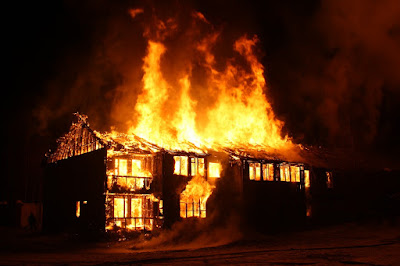 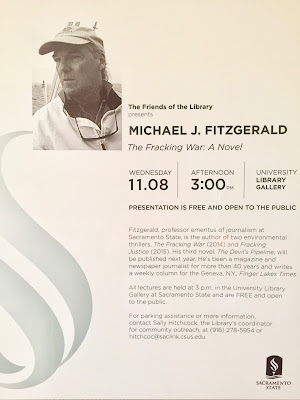 Posted by Michael J. Fitzgerald at 11:40 AM No comments: